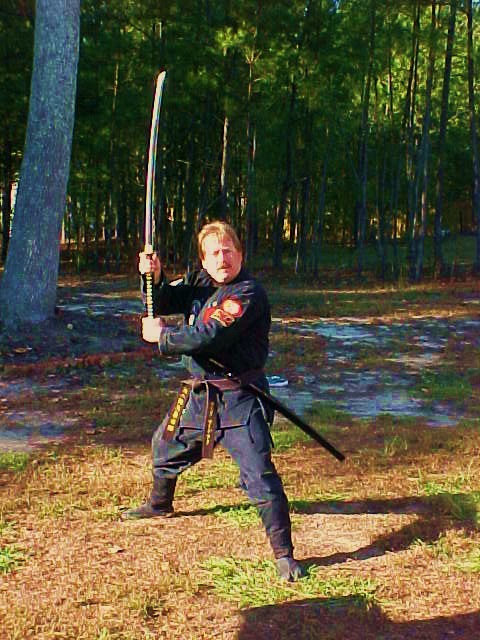 Shidoshi Murdock is a 5th Dan in Budo Taijutsu 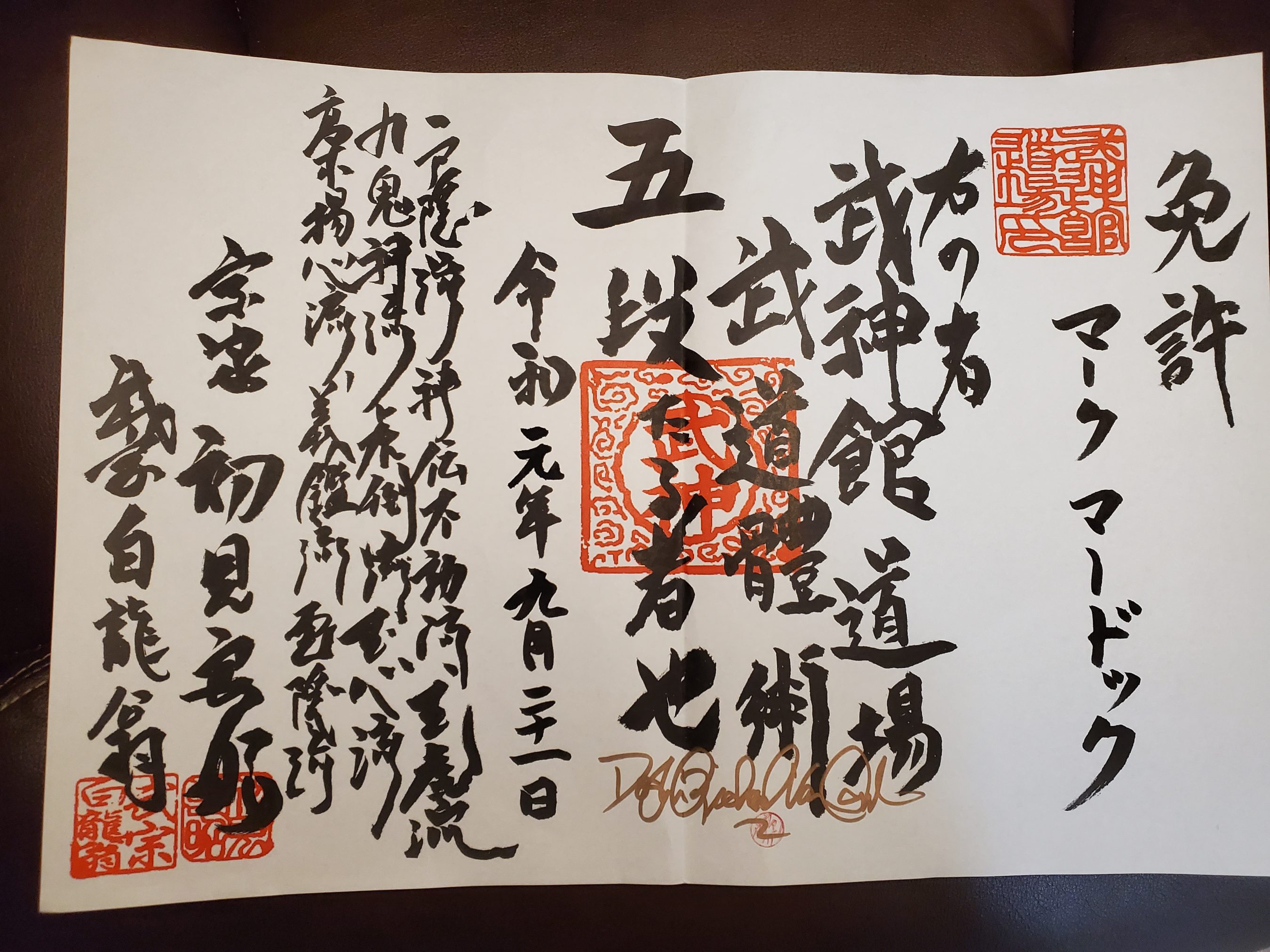 We are now accepting new students.

We teach authentic Bujinkan Budo Taijutsu. This is the authentic Japanese martial art of Ninjutsu.

Rivers Edge Bujinkan Dojo is in the same building as Southern School of Martial Arts. This art is taught on a separate mat on the same nights as the Ju-Jitsu class.

This is a great martial art for self defense, self protection and for mental refinement, life fulfillment and goal setting. This martial art will help you achieve a great sense of awareness, focus and personal wellbeing.

In the Budo Taijutsu (Ninjutsu) style, there’s striking, throwing techniques, grappling, joint locks with throws and take downs, ground techniques, weapon techniques and disarms, exotic weapons not normally seen in other martial art styles and the use of stealth and survival training, and in addition to the physical aspects of the art are the mental refinement aspects that are taught. Budo Taijutsu (Ninjutsu) encompasses the Body, the Mind and the Spirit.

We’re currently accepting students. Please call 919-753-7964 for more information or to enroll. We do have a free week trial in the Budo Taijutsu class.

These are the schools (Ryu) that make up the Bujinkan. This is a historic time for the Bujinkan with the transition of the art. Hatsumi Sensei is has retired and has passed the art to his Japanese DaiShihan (inheritors).

There are nine main martial traditions that comprise the Bujinkan Dojo training.

Was founded by Diasuke Nishina who was raised as a vassal of Kiso Yoshinaka in the early 12th century. When Yoshinaka’s army was defeated in battle, Diasuke escaped to Iga. There he learned various martial skills such as kosshijutsu and kenjutsu from Kagakure Doshi. It was initially called Togakure Ryu Happo Biken but has been called by various names since that time. Togakure Ryu is known for its use of tekko, senban nage and shinodake (4-foot breathing tube). Tukumi Takumi Tsutsui Daishihan was promoted to 35th Soke of Togakure Ryu Ninjutsu December of 2019.

Gyokko Ryu
It is believed that a Chinese person named Ikai introduced this art to Japan in the 8th century. According to Hatsumi Sensei, that person could also be somebody (kai) from a foreign (i) country. It is assumed that this kosshijutsu was based on Chinese martial arts. Although kosshijutsu means “to be able to knock down an enemy with one finger”, it can also signify the “backbone” [spine] of the martial arts. Ishizuka Daishihan was promoted to 29th Soke of Gyokko Ryu Koshijutsu October 2019.

Kukishinden Ryu
The founder of this tradition was Yakushimaru Kurando Takazane, a palace guard of Emperor Godaigo in the 1330’s. He was awarded the family name of Kuki (nine demons) for his spirited fighting and rescue of the Emperor. In addition to bo, yari, shuriken and unarmed fighting methods, this tradition is well known for its bojutsu and kenjutsu. Due in part to the Kuki family’s activities as suigun (navy) they adapted a low fighting posture that permitted better balance on turbulent waters. This tradition is related to Kukishin Ryu which is well known for its bojutsu.

Shinden Fudo Ryu
This ryu was founded by Izumo Kanja Yoshiteru. A characteristic of this ryu is its recognition of shizen (“natural”) as the only necessary posture of defense. However, in reality, a person imagines a posture of defense in his mind and places himself on guard. This tradition has two sections of fighting (dakentaijutsu & jutaijutsu) as well as the philosophy of not drawing a sword unless absolutely necessary. Nagato Daishihan was promoted to 27th Soke of Shinden Fudo Ryu Dakentaijutsu November 2019.

Koto Ryu
This art was founded in the middle of the 16th century by Toda Sankyo Ishinsai who had learned Gyokko Ryu from Gyokkan, a Buddhist monk. Koppojutsu originally came from ancient China and was also called Goho, which was characterized by its use of hidden weapons. The first kanji of koppo (kotsu) means bone, but can have the deeper meaning of “knack”. Noguchi Daishihan was promoted to 19th Soke of Koto Ryu Koppojutsu December 2019.

Gikan Ryu
Founded by Unryu Hangan Gikanbo, Daimyo of Kawachi Province. He developed this art from his lessons in kosshijutsu. The lessons of this tradition are almost totally unknown to the public and many of its secret techniques were handed down from soke to soke only.

Takagi Yoshin Ryu
Traces its lineage back to the 16th century scroll Rinpo Hiden which was studied by Ito Ki-i no Kami. This tradition was founded by Takagi Oriemon Shigenobu. This art developed through the years and has strong links to Takeuchi Ryu, Kukishin Ryu and Hontai Yoshin Ryu. This tradition teaches to always remain calm and flexible like the willow.

Gyokushin Ryu
This art is a branch of kosshijutsu and was founded by Sasaki Goemon Teruyoshi. Characteristics of this tradition include its unique usage of nawa nage (rope throwing) and espionage techniques. The secrets of this tradition have only been hinted about by the current grandmaster. Kan Daishihan was promoted to 22nd Soke of Gyokushin Ryu Ninpo December 2019.

Kumogakure Ryu
This martial art was founded by Heinaizaemon Ienaga Iga (Kumogakure Hoshi) who was also believed to be the originator of Iga Ryu Ninjutsu. The special skills of this tradition include its use of the kamayari (sickle spear) and kote uchi (forearm striking) techniques. Much of the training in this tradition is said to be likened to the taijutsu and philosophies of escape and evasion techniques in Togakure Ryu. Furuta Daishihan was promoted to 15th Soke of Kumogakure Ryu Ninpo December 2019.

Other training:
As well as the above mentioned Bujinkan traditions our dojo training also encompasses several other martial traditions as well. For instance, our kusari fundo training comes from Masaaki Ryu, while our daisho sabaki training comes from Takagi Yoshin Ryu, and our black belt level Shinken Gata training is derived from the philosophies and strategies of samurai hundreds of years ago. Some weapon training is derived from Kukishin Ryu and other ryu.