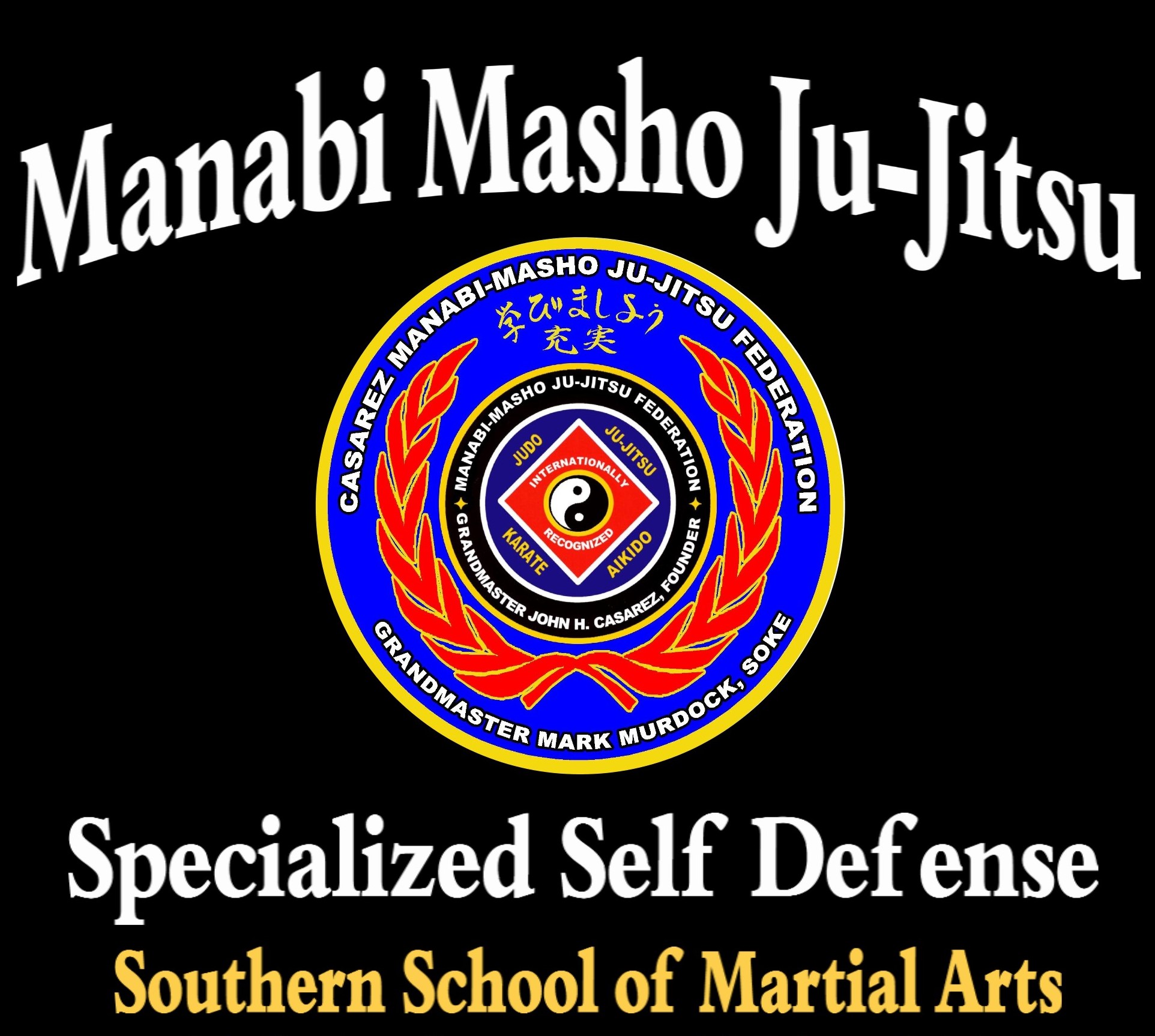 There’s no hard to learn forms or prearranged katas in our martial art, it’s free flowing without the complicated katas or forms common in Karate, Tae Kwon Do and other hard style arts. In real life self defense situations katas may not be effective in a real and random attack.

This is the best way to train and to learn how to defend against realistic random attacks without warning.

The original Manabi-Masho Ju-Jitsu concept began in 1968 and was created shortly after that. It was officially started in the early 70’s by Founder, John H. Casarez from traditional Japanese Hakko-Ryu Ju-Jitsu taught to him by his Sensei Tracy Cook. He also blended a lot of Judo taught to him by his Judo instructor Don Hutchinson. As an Aikido black belt as well he decided to add shorten down modified Aikido techniques into the art. He then added techniques from Karate and Chuck Norris system into the art. In the early 1980’s he added a some Bujinkan Ninjutsu techniques into the art after training with Stephen K. Hayes at several of the Ninja camps in the Dayton, Ohio area.

Over time he’s changed and modified select techniques from each art to meld and work together with the other martial art styles blended into the art. These techniques work seamless and flawlessly with each other making for a very solid and flowing martial art style. Founder GM Casarez currently is a 10th degree black belt in Ju-Jitsu. He also has black belts in Judo, Aikido, Karate, Chuck Norris system and Ninjutsu. He personally knows Chuck Norris, Danny Lane and Stephen K. Hayes. He also personally knows many other famous martial artists as well.

In June 2017 Soke Casarez tested Shihan Murdock to 9th Dan, “4 years early” due to Soke’s health issues at the time. He did this so Grandmaster Murdock could officially take over the system at anytime if Soke Casarez had any other major health issues.  On August 31, 2019 Soke Casarez officially retired from teaching and promoted GM Murdock to 10th Dan while at the WHFSC event. Soke Casarez passed the system down at the end of 2017, and again publicly in front of the Grandmasters and Master while at the 2019 WHFSC event awards banquet where he also announced his full retirement.

Grandmaster Murdock’s adaptation of Manabi-Masho Ju-Jitsu began in the early to mid 1990’s and added more Bujinkan Ninjutsu, weapons and weapon disarms. GM Murdock is currently a 5th Dan Shidoshi in Bujinkan Ninjutsu. GM Murdock also added several select techniques from Eskrima/Kali, JKD, Krav-Maga and Russian Martial Arts after attending 20 to 30 seminars in each over the last 23 years at the WHFSC seminar events. There’s also been a few select techniques from Wing Chun and Happkido blended in as well over time. Grandmaster Murdock is now the 2nd generation Grandmaster of the system.

In addition to our physical Martial Arts training students learn morals and valuable life lessons, how to be honest and respectful to others while having integrity and honoring those who give them knowledge.

With the increasing number of shootings in the country we now teach how to react to, and/or fight an active shooter if it becomes necessary. In certain situations you could overwhelm a shooter by aggressively attacking them before they can get a shot off. This could save countless lives. We also teach firearm tactics to defend against an active shooter. Our Martial Art is a great supplement to “Conceal Carry” for the normal person without any hand to hand tactical experience.

Grandmaster Murdock is a member of four Martial Art Halls of Fame and a Grandmaster member of the elite World Head of Family Sokeship Council and the newly formed International Council of Grandmasters.

We have a competitive tuition with many great plans to choose from. We offer a family, military and a first responder discount. We also have special advanced programs to enroll in once you become eligible. The Leadership Program, Black Belt Club and Instructor Program are upgrades to the regular program and have unlimited training per week with many other great benefits in including free belt testing. At our Dojo you get a high level of instruction from a certified and highly experienced instructor. You get an expert level of training that is second to none. This is well worth the tuition you pay for. If you’re shopping around for a Dojo to join, don’t let the tuition rates make your decision. Lower tuition rates often reflect lesser instructor experience and skill and most likely a lesser quality of training. In the end you get what you pay for. Give us a try for free and without any obligation or commitment. There’s no high pressure sales, ever. The training sells itself. We hope you will come in for a free week and give it a try before making a decision. We don’t want the tuition rates be the deciding factor, we want the Instruction, experience and training to do that. Just let us know when you want to come in. If you’re on a budget we’ll be happy to work with you and give you our best rate. Please call 919-753-7964 to schedule your free week.