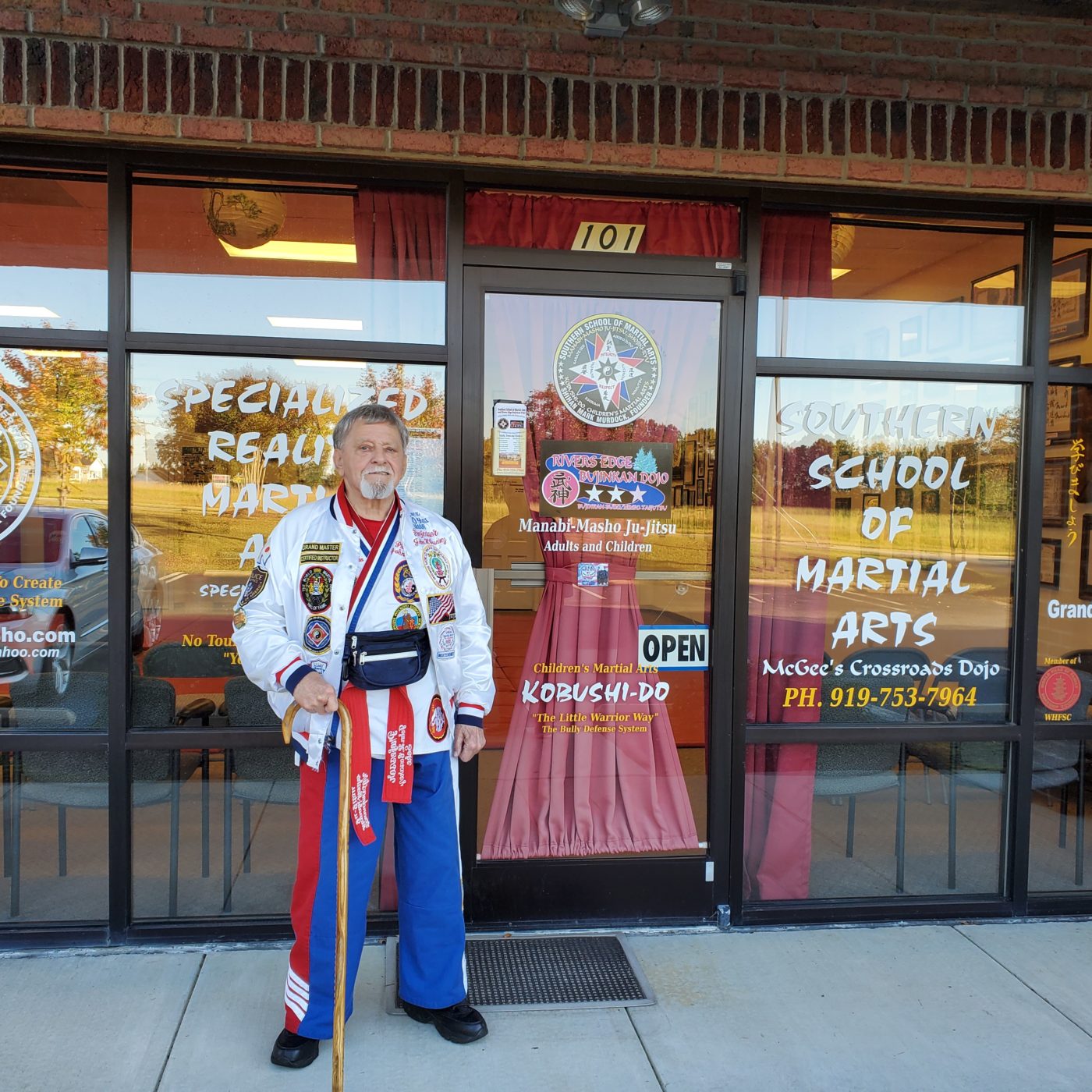 Professor Casarez in 2019 at the Southern School of Martial Arts

Professor Casarez taught his last seminar of his career here at our dojo. This seminar ended his 70 year career of teaching martial arts and teaching seminars. He has retired from teaching. 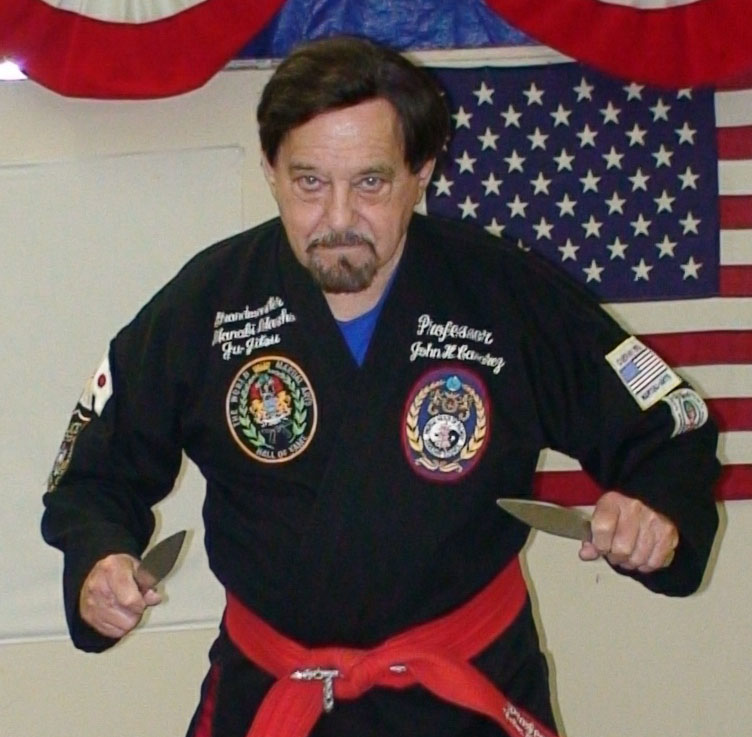 This picture was taken at the Homebu (home) dojo, Tri-City School of Martial Arts in late 2009 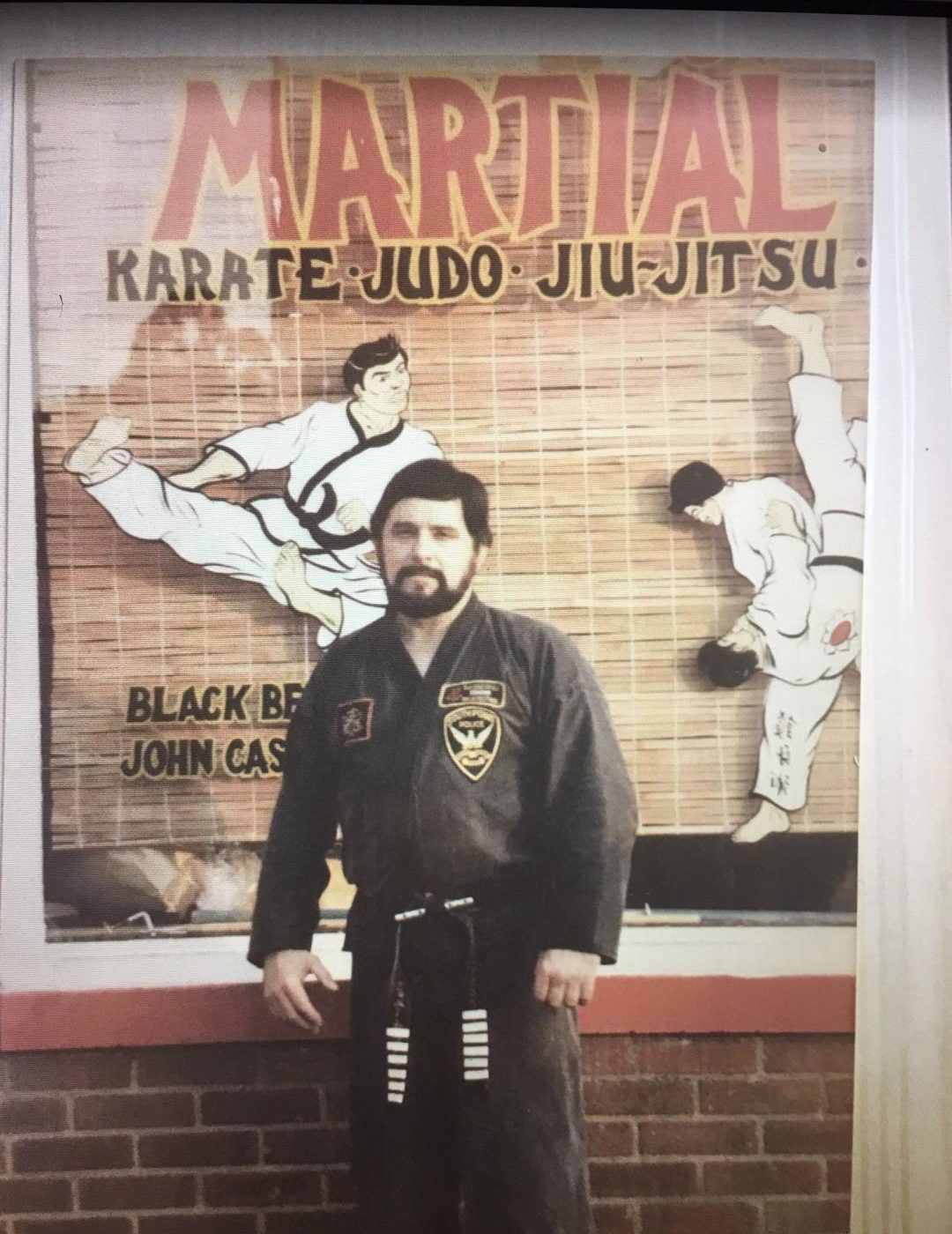 This picture was taken in front of the Tri-City School of Martial Arts location at the Ohio side of the old 6th street bridge. The building has since been tore down and replaced with storage company.

In the pictures above Founder, Professor John H. Casarez standing in front of his Soke-Dai’s Dojo Southern School of Martial Arts in North Carolina on October 14, 2019 and the picture below that a 1980’s picture of him standing in front of his original Dojo, Tri-City School of Martial Arts, located at the foot of the 6th St. bridge in Chesapeake, Ohio. Tri-City School of Martial Arts closed in February 2019. On August 31, 2019 Soke Casarez completely retired from teaching martial arts at the age of 82 with over 70 years in martial arts. He officially retired in the presence of all the Masters and Grandmasters at the 2019 World Head of Family Sokeship Council event. The Sokeship of the system was formally transferred to it’s Soke-Dai on September 1, 2019.

On October 14 and 15, 2019 Professor Casarez briefly came out of retirement to teach his very last seminar. It was held in North Carolina at Southern School of Martial Arts. He wanted to come to North Carolina one more time before he completely retired from teaching. It was an honor to have him at our dojo one last time.

His system was been renamed Casarez Manabi-Masho Ju-Jitsu, “The Working Way” by his Soke, Grandmaster Mark Murdock. The system will remain under Soke Mark Murdock until he retires and passes it to his Soke-Dai. Former Soke and founder John Casarez will still be an adviser to the Soke Murdock. In March 2019 Soke Casarez had an astounding 70 years in Martial Arts.

In 2010 had the opportunity to sit down with Soke Casarez and talk with him about his beginning in the martial arts and how he began his system, Manabi-Masho Ju-Jitsu. He shared a lot of great information with me and I am happy to share this with you.
Enjoy, Grandmaster Mark Murdock.

Founder Grandmaster Casarez began his training in the martial arts in 1948. Soke Casarez became interested in martial arts at the age of 11. His brother sent a Charles Atlas add in from a magazine. “This is the add that shows a muscular man kicking sand into the face of a small man on the beach, while he was sitting with his girl.” Soke Casarez says he received an envelope with all types of martial arts magazines. Soke began to read and practice the Martial Arts techniques in the books and at the age of 12, Soke Casarez began to train in Hakko-ryu Ju-Jitsu under the late, Ju-Jitsu Sensei Tracy Cook and Judo Sensei Don Hutchinson. Manabi-Masho Ju-Jitsu has it’s roots from Hakko-Ryu Ju-Jitsu and Judo. Soke Casarez has modified, changed and added to his art since then and his art is now loosely related to traditional Hakko-Ryu Ju-Jitsu.

Soke has taught many students in his 70 years in the martial arts including:

Listed below are the Awards Soke Casarez has be honored with:
1993: Awarded 10th Dan in Manabi-Masho Ju-Jitsu, Manabi-Masho was recognized by the World Head of Family Sokeship Council, He was also inducted into their Hall of Fame. He was also inducted into the World Martial Arts Hall of Fame in 1993.
In 1993 after attending a WHFSC event Grandmaster Yamato a representative of the Imperial Temples of Japan sent Grandmaster Frank E. Sanchez founder of the World Head of Family Sokeship Council a letter officially recognizing the World Head of Family Sokeship Council, in which the Manabi-Masho Ju-Jitsu system is a part of.
Soke Casarez was awarded Founder of System Award in 1993 by the WHFSC and Judo Man of the Year by the World Martial Arts Hall of Fame.
International Grandmaster of the year WHFSC 1994,
Golden Lifetime Achievement Award WHFSC 1994,
Grandmaster of the Year WMHF 1995,
3 Pioneer Awards-Life Merit of Excellence WHFSC 1996, 1997, 1998,
Platinum Award Cosmopolitan Florida Hall of Fame 2006,
Pioneer Award 2007 CFHF
3 Platinum Life Achievement Awards WHFSC 1999, 2000, 2001,
Best Martial Arts School in Nation WHFSC 1998,
International Man of The Year WHFSC 1999,
Grandmaster of the Year Award WHFSC 2000,
Patriot Award WHFSC 2002.
Life Achievement Award WHFSC 2001,
Councilman of the Year award WHFSC 2005 and Grandmaster Warrior Award 2010
Living Legend Award USA Martial Arts Hall Fame 2006, Founded in 1974.
Soke Casarez has been awarded other awards by other organizations but are to numerous to mention.

Manabi-Masho Ju-Jitsu was officially recognized in 1993 by the World Head of Family Sokeship Council as a martial arts system. Soke Casarez became the 51st member on the WHFSC Grandmaster’s division.